Until we are all free: Pulling the roots of gender violence in Guatemala and Canada

BTS Fredericton member Tracy Glynn gave this speech at the “Women on the Move Until We are All Free” rally in Fredericton on April 24, 2015.

I’m a member of Breaking the Silence – a network of people in the Maritimes who began organizing in 1988 to support the efforts of Guatemalans struggling for political, social and economic justice. We recognize that injustice is connected to structural inequalities both within and between countries. The horrific things we have seen and continue to see in Guatemala today – violence, femicide, brutal poverty — are connected to us in very real ways, ways that are designed and reinforced everyday. 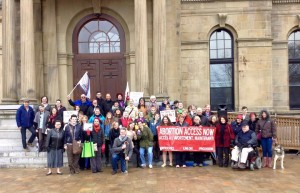 New Brunswick marked the World March of Women 2015 day of action by rallying for equality and solidarity at the NB Legislature on April 24, 2015. The focus of World March of Women 2015 is precarious work. April 24, 2015 marks the 2nd anniversary of the factory collapse in Bangladesh that killed 1,135 workers. Present at the rally were CUPE NB, the Common Front for Immigrant Women & Visible Minorities, the Common Front for Social Justice, Early Childhood Care & Education New Brunswick, Fredericton Gender Minorities Group, Fredericton Youth Feminists, the Maritimes-Guatemala Breaking the Silence Network, the NB Coalition for Pay Equity, Regroupement féministe du Nouveau-Brunswick and Reproductive Justice NB. Organizers are planning a march in October. Photo by Sophie M. Lavoie.

The armed conflict in Guatemala, which lasted more than 30 years, began with America’s bloody response to Guatemala’s democratic spring – a time of redistribution of lands to peasants and the flourishing of democratic freedoms. We know that rape was a systematic practice carried out by state agents as part of its counterinsurgent strategy, as a weapon of terror. We know that many women were sex slaves at a military camp in the 1980s. The slavery lasted six months for some, six years for others. Before kidnapping the women of Sepur Zarco, the Army murdered their husbands who were defending their land. In the 1960s, Canadian mining company Inco began entering the nickel-rich hills around Lake Izabal and their operations were subsequently connected to the Panzos Massacre and the murder of activists, professors and students in Guatemala City. Some of us know America’s intervention in Guatemala but too few of us know the story of Canada’s imperialist interventions in that country that continue to this day.

Guatemala has made important advances in building democratic institutions since the civil war but Canadian mining companies have also returned, compromised those democratic institutions and brought violence to communities already traumatized like they have done in Honduras, the Democratic Republic of Congo and on indigenous territories in Canada.

On Jan. 17, 2007, Maya Q’eqchi women from the community of Lote Ocho in eastern Guatemala say they were raped by the private security guards of a Canadian mining company, police officers and the army as they carried out a violent eviction of the community for the mine. These brave women are making legal history in Canada. For the first time, a Canadian company is being tried in a Canadian court for its conduct in another country. Eleven Maya Q’eqchi women are suing HudBay Minerals for rape in an Ontario court. Also suing HudBay in the same lawsuit is Angelica Choc who visited Fredericton and Mi’kmaq land defenders in Rexton in 2013 to tell us about how her husband, a community organizer against the mine, was murdered by the mine’s security guards. German Chub, a young man left paralyzed after being shot by HudBay’s security guard, is also suing the company.

Canadian transnational mining companies are pursuing their own despicable tactics to stop justice — in Papua New Guinea, women are being forced to sign away their rights to sue Barrick Gold for rape in exchange for the health care they need. The effects of rape are long-lasting: Some of the Maya women of Lote Ocho suffered miscarriages and an inability to conceive again. They have been stigmatized and forced to keep silent.

Over the past decade, more than 2,000 assaults have occurred against activists in Guatemala and over 100 activists have been murdered. Topacio Reynoso was only 16 years old when she was murdered one year ago almost to this day. Topacio was a poet, musician and youth organizer. She was murdered for what many believe was her role in protesting the Canadian-owned Tahoe Resources mine. Armed assailants shot Topacio and her father multiple times when they were travelling home from a meeting.

The link between land dispossession and rape is felt in Guatemala like it is felt here in Canada. Rape is used as a mechanism of control and subjugation, as a way to intimidate and punish women and their communities that are defending their lands.

Elsipogtog women made international headlines when they put their bodies on the line to defend their territories against shale gas. Annie Clair, a woman from Elsipogtog, is facing 6 charges related to the violent actions of RCMP against defenders of Mi’kmaq territory in Rexton on Oct. 17, 2013. Annie intends to fight the charges but she needs legal support. Please consider donating to Annie’s legal defense fund. Donations can be sent via email transfer to [email protected]

It’s in all our best interest to take on gender violence, not just violence against women, but all gender violence. I’m happy that we have the Fredericton Gender Minorities Group with us today. Indigenous scholar and writer Leanne Simpson notes that “gender roles have colonial roots that have caused the power and agency of all genders to shrink, and those that are farthest away from colonial ideals suffered and continue to be targets of harsh colonial violence.”

None of us can have a decent life under capitalism — the global profit-driven production system relies on patriarchy, gender violence and destruction of the land to survive. We must defend the most oppressed in these hardest of days, in the twilight of advanced capitalism, or we will never succeed in the liberation of us all.

View all posts by bts_admin →

← Minister of Foreign Affairs: Urge Guatemala to Renew the Mandate of the International Coalition Against Impunity in Guatemala – CICIG
Crisanta Perez at BTS Annual Gathering! →