Posted on August 22, 2017 by bts_admin in General blog, Signed Letters

Posted on July 20, 2017 by bts_admin in Current Events in Guate, General blog

The following article was co-written by MiningWatch Canada and the Network in Solidarity with the People of Guatemala (NISGUA). See the original article here: http://nisgua.org/smear-campaign-launched-against-opponents-to-tahoe-resources-escobal-project-after-mine-licenses-suspended/ Take action here! Following the suspension of two of Tahoe Resources’ mine licenses in Guatemala on July 5, Tahoe Resources’ suppliers, workers and the Guatemalan Industrial Association have engaged in […]

Posted on December 1, 2015 by bts_admin in Current Events in Guate, General blog

Tahoe Resources’ Former Security Manager Turns Fugitive December 1, 2015 (Guatemala City/Ottawa/Tatamagouche) On Monday, plaintiffs in the criminal case against Tahoe Resources’ former security manager, Alberto Rotondo, were informed that he had escaped police custody. Rotondo is accused of having ordered private security guards to attack peaceful protestors outside the Escobal mine in southeastern Guatemala […] 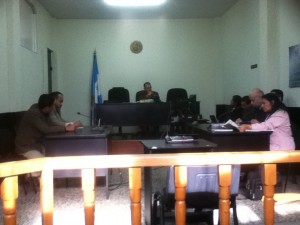 Tahoe Resources Continues to face Pressure in Guatemala and Abroad

Posted on February 4, 2015 by bts_admin in Current Events in Guate, General blog

February 3, 2015 Guatemala City by Jackie McVicar Today’s hearing to submit evidence in the criminal case against Tahoe Resources’ former head of security, Alberto Rotondo, was suspended until March 10 at 9am. Rotondo is accused of ordering private security to shoot 7 community activists who were peacefully protesting outside Tahoe Resources’ Escobal Mine in […]

On the Road for Justice: Rafael Maldonado Speaks in Ottawa

On March 18th, 2014, Guatemalan lawyer Rafael Maldonado spoke in Ottawa, ON, about the Human Rights violations taking place near the site of Tahoe Resources Inc. – a silver mining company owned by a Canadian firm. Here’s a little of what he had to say… (*Subtitle correction: “plata” refers to “silver” not “money” in […]